Where: In southeast Pennsylvania’s Northampton County, near Bethlehem.

Why: A spring keeps the stream free of ice, allowing access to a strong mix of both stocked rainbows and naturally spawning browns

How: Simple ties of Hare’s Ear and red fox fur into patterns that resemble cranefly larvae are your best bets.

Weight the flies internally, or add some split shot to the leader.

No matter what the air temperature, the southeast corner of the state, which is rich with limestone streams, has flowing water without the crystalline stuff that ice anglers enjoy.

These streams may have some ice around the edges, but they are routinely flowing full and free even in the coldest weather.

The reason for the ice-free water is that the streams are pumped with underground springs.

The springs get very cold, but they just do not freeze.

Where the springs are the main source of water on one of the southeast limestoners, the water continues to flow. 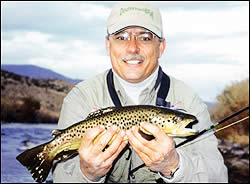 There may be some pools and eddies that have skim ice around the edges, but generally you can break through these waffle-thin obstructions with no problem.
One stream that stands tall among the tallest for trout anglers is Saucon Creek in Northampton County.

Located south of Bethlehem in a burgeoning area of the Lehigh Valley, Saucon has actually managed to improve over the last six or seven years.

The creek was once infused with the underground pumpings of New Jersey Zinc, located in the lower valley.

At that time, the water ran like a thin pea soup, green as a dusty emerald.

But when the mine closed, the pumpings ceased and Saucon went back to its limestone spring ways.

Saucon is actually a two-in-one stream with the upper portion in beautiful Bingen still stocked with trout.

But the lower stream has not been stocked since about 1993, and this area has been allowed to revert — actually improve — to a wild brown trout stream.

When the stream was studied in 1993, PFBC biologists found a brown trout biomass of 75.5 pounds per acre in one section of the non-stocked stretch.

That figure won’t mean anything to you until you hear what the current biomass numbers are.

A portion of Saucon Creek is under a very unusual set of special regulations known as the “Selective Harvest Program.”

There are only five streams across the entire state governed by these rules.

The hallmark of the selective harvest rules is that fishing is open year-round, no bait can be used but both hardware and flies are permitted.

Also between the regular start of trout season in April through Labor Day the minimum size brown trout that anglers can keep is 12 inches while other salmonids need only be 9 inches.

After Labor Day — which means now — no trout may be killed or retained in a selective harvest stream.

As far as the size requirements for brown trout versus other salmonids, these are indeed very strange regs.

The special section of the Saucon Creek contains 2.1 miles of selective harvest waters.

The section goes from the upstream boundary of the Bethlehem city property downstream to the Route 412 bridge.

Aside from the rules and regulations, you should know that the Saucon is a thin, small-rocked stream, with an average width of some 40 feet, though it has some stretches in the 50-foot range.

Both banks are uniformly flat and brushy but with its adequate width, the Saucon is not one of those cotton candy streams where every backcast gets stuck in the trees behind you.

However, with its usual thin water, the Saucon’s trout have a certain advantage over you.

The main thing is they can see you coming, particularly when you have to fish downstream as is common in winter when there are no hatches.

I get to fish the Saucon quite often and I think I’ve learned a little of what the trout like at this time of year.

The first is constructed on a straight-shank nymph hook and is made with medium-shaded Hare’s Ear, but without a wingcase or tail.

This pattern resembles a cranefly larva, which are prevalent in the Saucon. Another fly is the same style pattern but it is made with pale red fox fur.

I weight both flies internally then add split shot to the leader as needed.

The Fish and Boat Commission surveyed the creek not too long ago and came up with some wonderful results.

The stream was studied within two sections of the selective harvest area.

The first was located just above High Street in Hellertown; the second was within Bethlehem’s Saucon Park.

Frankly that’s a pretty impressive number for 12- to 15-inch fish in a stream where big-fish habitat is at a premium.

However, things were even better at the second site. Where the PFBC team studied another 330-yard stretch in Saucon Park, they found 529 trout.

The team also found three trout between 17 and 19 inches. Obviously there is some better big-fish habitat in this second section.

Depending on water flow, the width of this second section has been measured between 51 and 57 feet.

The first section has been measured between 38 and 42 feet.

But just as importantly, the current biomass per acre in the first zone is 191 pounds, 2½ times that of ’93’s measure.

Parking access along Saucon Creek is somewhat limited, but once on stream there is no problem.

Primarily, the creek is centered around Hellertown. Everything lies just to the west of Route 412.

There is ample parking at a municipal park off High Street. There is also good parking at the Saucon Park in Bethlehem.

One spot is near the iron bridge at SR 3004, at the bottom of Hickory Hill Road.
If you are new to the area, you want to drive in by 412 then turn west towards the stream.
Once they learn the area, many anglers come in from the direction of Route 378 west of the stream. Doing this you avoid the busy Hellertown roads.