Big Sheen Rapids
Take Highway 55 south from Lily and turn south (right) on Wolf Road. Access is at the Wolf River Landing. There are couple of nice runs upstream, a terrific hole within casting distance of the parking lot, and fun pocket water downstream. This site provides easy access to some very good fishing, and is a very good choice for days when there’s a lot of boat traffic on the river.
Burnt Point Rapids
Take Hollister Road west from Highway 55. This is one spot I will fish every year, and almost every trip. Wonderful pocket water, productive runs, and terrific riffle sections make this my favorite place to bring fly-fishing friends. Two of my biggest Wolf River fish came from this section of water, and it fishes well all the way downstream to the next access. A lot of people make the mistake of fishing the slack water upstream on the east side of the river, which has a good supply of splashy chubs, but the trout are usually concentrated in the pocket water here.
Irrigation Hole
The Irrigation Hole access is on the west side of Highway 55, three miles north of Langlade. This is the end of the catch-and-release section. There’s so much great water around this access that it would be impossible to pick my favorite part. The Irrigation Hole itself features some deep water ,and big trout that are easier to spot than catch. Hemlock Rapids is about a 45 minute hike upstream, and gets very little pressure. The flats above and below the Irrigation Hole are almost uncharted territory for fishing, but there are some deep holes waiting for the angler with the patience to learn them. Downstream, the Sherry Rapids area is all but unfished, and has always been productive for me.
Rocky Rips Access
There are two Department of Natural Resources (DNR) accesses on Rocky Rips Road, which is south of Highway 64 and west of Highway 55 in Langlade. I enjoy wading this section any time the water is at a reasonable level. The dry-fly fishing can be unbelievable, even though this section gets more pressure from the locals than some of the other water on the river. Bob Talesak’s Wolf River Fly Shop is on this stretch of rapids. The entire stretch is productive, with enough pocket water to fill days of fishing.
Herb’s Landing
This access is two miles west of Highway 55 on County Highway M. Look for the access sign. This is a launch point for some of the raft trips, but is also available as a fishing access. Upstream is the latest Trout Unlimited berm, which fixes the worst “heat sink” on the river. The fish are just starting to repopulate this section, but it should continue to improve. Fishing is good through Garfield Rapids downstream, and upstream to Spring Creek.
County Highway M Bridge
This access is at the bridge 1/4 mile west of Highway 55 on County Highway M. This is a major take-out point for rafters, so it gets mobbed between 1 P.M. and 6 P.M. on most weekends. This is a great spot for beginners, and very easy to get to. The area right at the bridge gets a lot of pressure from bait fishermen so you’ll do better if you walk upstream or downstream a ways before you begin to fish.
Local Help
Mike’s Mobile at the corner of Hwy 64 and Hwy 55 sells flies, rods, reels, and some other supplies, and can provide limited river information.
Bob Talesak runs a weekend-only fly shop, located on Rocky Rips Road in Langlade.
Before you go, check the U.S Geological Survey flow gauge on-line.
Wayne Anderson and Gary LaFontaine’s Fly Fishing the Wolf River cassette tape (part of the River Rap Series, #A111. $13.95. 1-406-443-1888) is the single best source of information about the Wolf River. It also contains a pattern list, hatch chart, commentary, and a map.
Jim Humphrey and Bill Shogren’s Wisconsin & Minnesota Trout Streams : A Fly Anglers Guide provides a 10-page description of the Wolf and plenty of information on other local streams.
Cap’s Hair-wing Adams 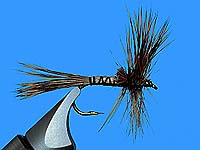 HOOK: Mustad 94840 #8-18.
THREAD: Black 6/0.
RIB: THREAD
TAIL: Stiff deer hair.
BODY: Same as tail.
WING: Same as tail.
HACKLE: Brown and grizzly.
Cap’s Hair-wing Adams is an excellent fly for the Wolf River. It’s a good attractor fly–especially on overcast days–as well as a general imitation of several of the important mayflies on the river. It’s durable, and fishes well, even when chewed up. Most importantly, it floats like a cork through the heaviest water. Its design was a dual effort by Cap Buettner, a legendary flyfisherman and conservationist, and Ed Haaga, an equally renowned fly tier.
Use thread to build a tapered body on the back 2/3 of the hook. Measure and stack a clump of deer hair about 1 1/2 times the hook length. The deer hair should be pencil-thick on a #10 fly and thinner on smaller flies.
Tie the deer hair on top of the tapered body, wrapping the thread back to the bend of the hook. Use only enough pressure on the thread to compress the hair, not cut it. Take three more wraps near the bend to secure the hair, and add a drop of cement at the tail.
Wrap the thread back to the front of the body, and trim the butts closely. Tie in a hair wing, dividing the wings. Leave a short, stubby bit of material (about 1/8 the length of the wing) when you trim the butts of the wing to suggest the beginning of the thorax.
Tie in one grizzly and one brown hackle, and wrap 3-4 turns with each, finishing with the grizzly in front. Some tiers cover the body with head cement, Dave’s Flexament, or acrylic.