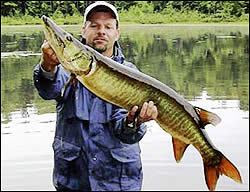 Muskie
You’ll find your best summertime success in Long and Planting Ground lakes.
“What’s particularly neat is that there is a daily operational boat lift between the chains so anglers can go from chain to chain. If they had the willpower, time, and a very understanding spouse, anglers could literally fish 45 lakes without getting off the water.”
You can reach the Three Lakes Chain starting about 5 miles south of Eagle River.
Very unusual is the fact that the whole Three Lakes system actually flows north, so the lower you go on the Three Lakes Chain, the closer you are to Eagle River.
“Just enjoy,” said Langley, “and don’t try to figure out why or how Mother Nature does things!”
“This Chain is an excellent, year-round-action water, but it’s particularly good in late summer,” said Langley.
“And while that may surprise visitors, locals are happily used to it, and flock to the Chain constantly during this time period.”
Langley points out that while there is extensive development (except in bog areas), the Three Lakes Chain is very scenic and there is less boat traffic proportionally than on other extensive chains of water.
“This makes it easier to fish, and it has both depth and shallow water with a good selection of weed areas,” Langley said.
“The water is dark tannic throughout.”
The entire Three Lakes Chain has sand bottom, with good rock structure, rock bars and weed areas.
Long Lake
“Long Lake, which is the lowest lake on the Three Lakes Chain, is a very good numbers lake for walleye,” said Langley.
“It has prominent land points, which are, in several areas, marked with buoys because of rock structure.”
“This rock structure makes excellent holding areas for walleye during the late summer time period.”
“On the south end of Long Lake,” Langley said.
“There’s a hole adjacent to a weed bar, and another one off of Honey Rock Camp in the middle of the lake. The holes go to 30 feet, which is the max depth on Long Lake. These are very good places for walleye anglers to fish.”
“As for muskie, the weed structure throughout the lake is primarily adjacent to shorelines, and is a superb muskie and panfish-holding water,” Langley said.
“Muskie are in weedflat areas extensively feeding on panfish. The depth will range from 10 to 12 feet and shallower. Anglers should fish all depths in these areas, which are extremely productive.”
Another excellent spot for both muskie and walleye is what is called Anchor Bar, a piece of structure located in lake-center, on the west side of the lake.
Langley also points out that all species of panfish are in Long Lake (as well as the rest of the Chain, for that matter), with great numbers of ‘gills and perch, and a very nice population of crappie.
The perch and ‘gills will locate in the weeds, with crappie in the holes at this time of year.
Planting Ground Lake
The next lake up from Long Lake is Planting Ground Lake, which has a max depth of 35 feet, with extensive midlake rock structure spaced throughout the entire lake.
“All of this structure is very good walleye-holding territory at this time of year, again, with shoreline weeds almost spaced evenly throughout the lake being very good for muskie,” said Langley.
“Planting Ground Lake is a big lake, with coffee-colored water, and lots of marshes flowing into it — that’s why it’s so dark.”
“A nice secret for anglers is that there are sneaky, quiet, little lakes attached to Planting Ground Lake that most anglers simply don’t fish. Big mistake! Rangeline and Townline lakes are both super for muskie, northerns, panfish, and some walleye.”
“And I want to note that while most folks don’t fish for northerns on these lakes, the northerns hit bucktails that are tossed for muskie, big time. These smaller lakes are an absolute blast to fish.”
Baits to use
“There’s no rocket science involved in figuring out what to use on the Three Lakes Chain,” said Langley.
He suggests using leeches primarily for walleye, with minnows as a second choice. For muskie, try surface baits and bucktails.
If you use bucktails, make sure you have them equipped with fluorescent blades because of the dark water.
For panfish, use small minnows for the crappie; waxies or garden worms for the ‘gills; and small leeches, worms or (if you can find them and can afford their very hefty price tag) hellgrammites for perch.
Hellgramites are the aquatic larva of the Dobsonfly, which many anglers swear is the finest panfish bait available, particularly for perch.
Etc.
Throughout the Three Lakes Chain, there is a potential to catch a legitimate trophy muskie, while walleye tend to be average-sized, and panfish — especially crappie — run very good on size.
“Find the cribs,” said Langley.
There are cribs placed throughout the Chain in 10 to 15 feet of water, and these are great fish-holding areas, especially at this time of year, because of the warm water, weed growth and boating traffic.
Savvy anglers will always try the cribs out.
“The fact that I’ve only discussed a few of the 17 lakes on the Three Lakes Chain should not dissuade anglers from trying any of the others,” said Langley.
“The lakes I’ve discussed have been particularly productive for me over the years during the late-summer time period, but that doesn’t mean that other lakes on the Chain won’t do as well.”
“Anglers should remember that this chain of lakes produces great action, somewhere on it, 365 days a year.”