Apply a fly for musky, walleyes at Van Vliet PRESQUE ISLE, Wis. — World-class fly angler and guide Bill Sherer knows Presque Isle waters as well as anyone.
“I grew up in the area, and I’ve fished these incredible and totally underfished Presque Isle lakes for decades,” he said.
“There is no greater thrill for a fly angler than to light into a 50 to 60-inch musky or lunker walleye in late November. Presque Isle has these fish in an area so totally unspoiled and unknown that only the chosen few who recognize what’s here have this once-in-a-lifetime experience.”
“Indeed, at any given time on any given lake in Presque Isle — which is rightfully known as ‘Wisconsin’s Last Wilderness’ — you may see one other boat. Two other boats would be a crowd.” 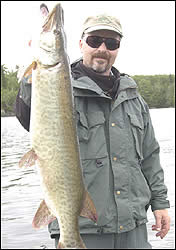 Trophy musky, like this 47-incher held by Wally Banfi, are the top target on Van Vliet and Presque Isle lakes.