Fish have been in the Sandy since late November, and they’ll continue to come through the hatchery peak and into the first runs of summer fish in March.

Why: The Sandy is known for both its numbers and big-fish potential.

It also has water that matches any technique you care to use.

How: Best bet in the extreme lower river is to plunk sand shrimp, but you can also fish jigs and bobbers, yarn, etc.

SANDY, Ore. — As December comes to a close, serious steelheaders are gearing up for the late runs up the bigger Columbia River tributaries, such as the Sandy.

One of the best known rivers for winter steelhead in Oregon, the

Sandy has fishing to match its reputation.
As the first steelhead of the season start their way up the Sandy, many savvy anglers will target the lower portions of this beautiful river.

They know that the freshest fish the river has to offer will be caught there.

No one knows this better than salmon and steelhead guide Jack Glass of Hook-up Guide Service in Troutdale.
Glass has been chasing winter steelhead on the river for more than 20 years, and he has seen the river’s winter run of steelhead go from boom to bust to boom again. 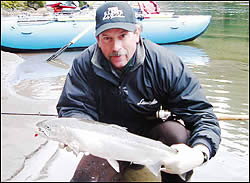 His drive has helped such sportsmen’s groups as the Northwest Steelheaders combine resources with state agencies to enhance fishing across Oregon.

However, he calls the Sandy River home, and I was able to catch up with him at his Troutdale shop recently for a chat about his expectations for his favorite river’s steelhead run, and to talk about the methods he employs to catch them.

“Although the Big Creek stock is no longer planted in the Sandy,” said Glass, “we are still seeing some early fish, and there are some hatchery fish showing up too.”

Glass notes that although the early season saw less fish than in past years, there were some fish all the way to the hatchery at Cedar Creek by late November.

Expect the fishing to really pick up after the holidays, and to stay good right through March. “January, February, and March will all be good,” said Glass.

He refused to be pinned down about when the peak of the run will be, explaining that weather and flows in the river will decide that.

One thing is sure from year to year on the Sandy: Expect to see some brutes. The river consistently pulls some 20-plus-pound steelhead.

Glass can also be heard as the host of the Outback Angler Radio Show on Saturday at 6 a.m. on KOTK 1080-AM.

According to Glass, as the steelhead start to enter the river in good numbers, anglers on the lower river will start to catch fish from boats and the bank.

Anglers who like to plunk will do especially well from the Troutdale Bridge down to the mouth.

The usual plunking rig consists of a three-way swivel with an 8- to 10-inch lead line leading to a 2 or 3-ounce pyramid sinker.

The other leader is usually 24 to 30 inches long and ends with a Spin-n-Glo tipped with bait or scented yarn.

When the river is running clear, pink or pink-and-white are the favorite colors. Tip the Spin-n-Glo with bait such as sand shrimp or pink prawn tails.

Many anglers use a bit of yarn with scent.

The yarn has a tendency to get stuck in the fish’s teeth, giving anglers a little extra time to send the hook home well. Some of Glass’ favorite scents include Mike’s Shrimp Oil and Smelly Jelly Crawfish.

Boat anglers and shore fishermen both score on the Sandy using drift techniques.

The same kind of baits and colors work with this method as plunking, except most fishermen opt for a Corky or Cheater instead of a Spin-n-Glo.

Boat fishermen often use a technique called free drifting, which describes the method of letting the boat and bait drift along with the current through the best fish-holding water.

Other popular methods include back-trolling plugs or divers with bait. Both are tried and true methods.

Popular plugs include the Brad’s Wigglers and Wee Wigglers. Glass prefers the blue and green pirate patterns as well as the silver with the orange back.

“Sometimes very early in the morning I do quite well with the black-and-white pattern,” said Glass. Other good plugs include the Hot Shots in size No. 30.

Glass also likes to run diver and bait on occasion, and he prefers Brad’s divers.

He uses a 5-foot leader that ends with a small Spin-n-Glo tipped with a No. 2 Gamakatsu hook. He tips the hook with a small amount of roe or shrimp.

Increasingly, bobber-and-jig methods are being used on the Sandy, and Glass fishes them more all the time.

He feels this method fishes the best in 3 to 7 feet of water. His slider rig includes a bobber by West Coast Floats with an in-line ¼-ounce weight about 2 feet above the jig.

The jig that completes the rig is a ¼-ounce marabou jig by Beau-Mac’s.

Glass swears by the 12-pound test Stren Fluorocarbon leader, but he cautions anglers that not all fluorocarbon lines are equal.

“There are a lot of inferior fluorocarbon lines out there, but if you stick with the Stren you’ll do all right,” he said.

Most boat anglers fishing the Sandy are targeting transient fish.

They tend to keep moving until they reach the stretch between Oxbow Park and Dodge Park, which Glass considers to be some of the best fishing that the Sandy has to offer.

“It’s probably the most productive stretch of the river,” he said.

These transient fish come in spurts, so if you catch one, it’s a good bet you’ll catch more.

Power boats are only allowed up to Dabney Park. Also, fishing from a floating device is only allowed below the power lines located about 1 mile below Oxbow.

Advice from a pro

When asked what advice he would give to anglers fishing the Sandy for the first time, Glass had a number of suggestions.

“Come out and look for the fishermen and leave your rod in the car,” he said.

“The fishermen are more apt to talk to you if they don’t feel like you’re moving in on them. Ask them what they’re using, and watch how they’re fishing. If you see someone catch a fish, note the time.”

“Steelhead get into a pattern in the river, and tend to go on bites at the same time of day. Come back the next day ready to fish, and apply what you learned.”

As the season progresses, expect to see more wild fish enter the river. Wild winter steelhead get very big in the Sandy, and they fight like demons.

When March arrives, the first of the Sandy’s summer steelhead will enter the river, giving the angler a chance for a real mixed bag of steelhead.

It’s often the very best month of the year for steelheading on the Sandy. Later in the year the upper reaches will get good.

That’s the time to look for them all the way to Marmot Dam.