By Scott Sampson
ITHACA, N.Y. — The leaves have turned to red and gold, there is a nip in the air and the trout and salmon in the southern end of Cayuga Lake are practically jumping in your boat.

What: Light-line trolling for landlocked salmon, brown, rainbow and lake trout in fall.

Where: The southern end of Cayuga Lake in western New York.

Why: Salmonids stack like cordwood off local tributaries, waiting for annual spawning rituals and feeding voraciously.

Fish will average better than 3 pounds and a trophy of 8 pounds or more is possible.

Launch: Taughannock State Park, 7 miles north of Ithaca on Route 89, has the only year-round launch on Cayuga Lake.

They appear to be on a feeding binge that will hold them throughout the winter, and now’s the time to fill your larder as well.

Don’t get carried away looking at the scenery — its hypnotic beauty will be tempting.

Rather, keep your eyes on the finder to navigate the mounds and trenches that make up the bottom contours over which you’ll find the most productive trolling.

Shallow trolling 10 to 20 feet below the surface will result in landlocked salmon, rainbows and browns.

Deep trolling in 45 to 90 feet should bring you steady strikes from lake trout. 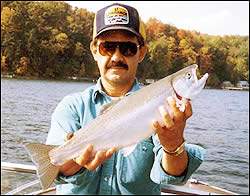 You’ll catch rainbows, like this one, browns and landlocked salmon staging off trib mouths now.
Cayuga’s water is gin clear, due to the time of year and the influence of the zebra mussel.
That means you need to increase your leads from the boat, use smaller diameter line and smaller lures. Use lures in the 1½ to 3-inch range.

Tamron Honey Bees and Sutton 21s are productive at this time of year. Both silver and colored lures or combinations will work well.

I’m partial to silver with colored tapes such as purple, blue and green. I also like full painted lures such as orange-and-white and blue-and-white.

Test them alongside your boat to ensure the proper action — that’s more important than setting your speed by GPS or trolling indicator.

Trolling speeds are best when ranging from 2 to 3 mph.

Yes, you will still take lake trout at these speeds, but you will also entice the landlocked salmon and brown trout that are staging off the creek mouths in anticipation of the spawn.

The rainbow trout, while a spring spawner, will often begin their spawning run in the fall; they are also opportunists that are willing and able to eat the eggs of the salmon and brown trout.

Cayuga Lake has an average depth of 181 feet with a maximum depth of 435 feet.

Twenty-five percent of the lake is in the littoral zone, meaning that it is 20 feet in depth or less, and most of that is in the northern quadrant.

Bass are the most popular species on this lake, and during the season you can fish a tournament on any weekend day. But to the knowledgeable cold-water angler, it is the trout and salmon that attract the attention.

While you can find good fishing from Long Point to Meyers Point, the best fall fishery is in the lower quarter of the lake from Sovocool Power Station, formerly Milliken Station, to Ithaca.

Tributary estuaries are the big attractions in the fall, as both brown trout and landlocked salmon prepare to spawn.

Taughannock (State Park) Creek off Route 89, 7 miles north of Ithaca, is a favored place and is open to year-round fishing.

Not only is there deep water off the point within casting distance, but the launch is bubbled to keep it open, even in the coldest months.

You also don’t have to travel any distance to catch fish.

Trolling patterns run close to shore, across the creek mouth and back into the bays on either side of the point.

Depths just 50 yards offshore will be in the 100-foot-or-more range.

Directly off the creek is a ledge, and below that, lake trout are stacked waiting to gobble loose spawn, but you can catch them with white hair jigs vertically dropped from a boat or fished from shore with a long cast.

In fact, white jigs are an effective lure for all the species.

While you can troll surface lines, lead core or dive planes, I like to use downriggers for precise presentations, even though I may be trolling in the 10- to 20-foot range.

I have on three occasions had four landlocked salmon on at the same time.

No, I didn’t land them all, but the Chinese fire drill was as good as angling gets, with screaming runs and line tangling leaps.

When it’s over, you reach for the pliers, cut the lures and swivels free and begin again.

There is also a magic triangle for trollers. It begins at Taughannock, runs northwest to Sovocool Point, south past Meyers Point and back to Taughannock.

Meyers is the estuary of Salmon Creek.

At the power station the warm-water discharge attracts the salmonids at this time of year.

You will also find the trout and salmon suspended just below the surface in midlake.

The estuaries of Fall Creek and the Cayuga Inlet which both enter the lake along the southern shoreline can also be prime water.

Troll this area with surface lines because of the very shallow water and weed cover.

You’ll find boat ramps at Taughannock State Park, Meyers Point Municipal Park off Route 34B and Allan Treman Marine Park, which is located in Ithaca off Route 89 on the Cayuga Inlet.
Support services are available in Ithaca, including full-service marinas. Call the Visitors Association (800-28-ITHACA).

Get park info by calling (607) 387-7041 and check out the weekly fishing reports at dec.state.ny.us/website/reg7/r7fishln.htm
Generally, the wetter the fall, the better the fishing.