The tremble in Jim Bell’s voice was genuine. Bell, from Rochester, New York, was on his first shark outing off the coast of Maine, accompanied by his four teen-age children. It was a hot, flat, steamy blue day, the kind that coaxes cooperation from sharks, and Big Mama had just crashed the party. 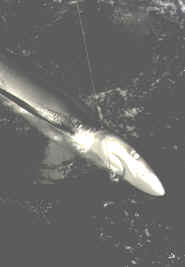 I peered over the side just in time to see a giant caugdal fin disappear beneath the keel. The huge shark reappeared on the other side of the boat, then drifted down into depths and out of sight. Seconds later, the farthest-out balloon, the white one, exploded with a loud pop as it was yanked under, and the line sizzled from the reel. I pulled the rod from its holder and handed it to Jim. He counted to ten, then struck back. Nothing.

This scenario was repeated three times over the next 15 minutes, but the big shark seemed to know it would be hooked if it swallowed the bait. It spit the mackerel twice, then merely mouthed a fresh codfish fillet dangled on a sharp 10/0 hook before it eased into the depths for the last time.

Jim Broke the silence by snapping the tab on a cold can of Pepsi. “Hell,” he said in a matter-of-fact tone, “I won’t have room in my new house big enough to hang a shark that size anyway!”

But the day was far from over. By mid-afternoon we had hooked a half-dozen more blues and landed three, all of which were released. We guesstimated one at an even eight feet long, the size Jim had in mind for a mount. The shark swam off, but his vital statistics were recorded and sent to the Pflueger Taxidermy people in Miami. A fierce-looking fiberglass replica now graces a wall in Jim’s new house.

Blue sharks, once considered more of a nuisance to tuna fisherman than a big-game target, have mushroomed in popularity in Maine waters. The reason is evident. They’re abundant in the summer, normally willing to take a bait, and average 75 to 300 pounds. And, regardless of what dyed-in-the-wool tuna fisherman may say, blue sharks are fine gamesters. The key is to use light tackle.

But before we get into the how-to’s and where-to’s of blue sharking, a little background on this species may be helpful. Blue sharks are found in all the major oceans of the world, and are readily identified by their indigo blue coloration, slender body shape, and long, narrow pectoral fins. Blue sharks are one to two feet long at birth and may attain a length of 13 feet. Maximum life span is thought to be 13 years.

Blue sharks enter the waters off New England in May and usually stay until October, preferring water temperatures between 55 and 64 degrees. They feed on a variety of fish, including cod and flounders at depths greater than 200 feet, as well as squid, bluefish and mackerel. Although they’re frequently sighted at the surface in warm weather, blues mostly inhabit deeper, cooler subsurface waters. When fall arrives, these sharks migrate southward along the Continental Shelf to Cape Hatteras and the edge of the Gulf Stream.

Where can blue sharks be found off the Maine coast? Almost everywhere! Humps, peaks and plateaus from about five to 25 miles offshore are very productive, and I’ve found that depths averaging 180 to 350 feet hold blues regularly. But Cal Robinson, proprietor of Saco Bay Tackle and Maine’s leading shark guru, gets specific.

“The area called The Gulch (loran numbers 13245/25860) south of Doggett’s Ridge is a great blue shark spot,” he says, “as is the ‘Shark Grounds’ (13290/25810) northeast of Jeffreys Ledge. Both are only twenty-some miles offshore and within range of small-boat sharkers.” Another good area is the “Kettle Bottom” 10 miles due south of Sequin Island.

Robinson suggest that shark anglers find a “thermal break” in these areas, where warm and cool surface waters meet (a seawater temp monitor is needed) and set up their drifts on the warm side of it, preferably in water as deep as 500 feet. “Six to 12 blue sharks a day is common,” he says, “plus there’s always the chance of hooking a mako, thresher, porbeagle or bluefin tuna in the 100 to 300-pound class. It’s exciting fishing!”

Tackle for blue sharking can be simple and inexpensive. A 3/0 to 4/0 size reel matched to a six-foot stand-up style rod loaded with 30- to 50- pound test mono will do fine, although some veterans prefer an 80-pound outfit in case one of those bigger critters is hooked. Either way, a good rod belt with a gimbal pin, plus a shoulder or kidney harness is a must. Lighter gear, 20- or 12-pound, can be used on blues and is a lot of fun, but you may run into problems if Big Mama actually decides to take the bait! Terminal tackle is easy, too. Many sharkers double the last 20 feet or so of their line with a Bimini twist, then attach a 200-pound test ball-bearing snap swivel with an Offshore Swivel Knot. The leader can be single-strand stainless from 100 to 300 pound test, with a haywire twist in the upper end and a 6/0 to 10/0 hook. A balloon makes a good float, and sometimes you’ll need a few ounces of lead weights to keep your bait down when the tide is running hard.

Bait for blue sharks can be whole or chunk pogy, mackerel, herring, whiting, or any small bottom fish. You can grind up your chum, but I prefer to buy mine from Cal all frozen in five-gallon pails. I dump the frozen block of chum in a heavy mesh bag and hang it over the side as I drift along. The chum thaws slowly and provides at least six hours of automatic shark attractant.

For more information on Maine sharking, or to get set up with the right outfit, tackle, bait and chum, visit Cal at his first-class tackle shop on Rte. 1 in Saco (207) 284-4453. He also sells those plastic-coated Offshore Fishing Charts that show where all the most productive grounds are, complete with loran numbers. They’re a bargain at $15.

Finally, if you either don’t own your own boat or want to give blue sharking a try before you invest in the gear, consider chartering a boat for the day. Most of the sportfishing boats advertised in this magazine offer shark trips, a great way to learn the ropes and have fun in the process.

Capt. Barry Gibson writes for The Saltwater Sportsman and The Maine Sportsman. The SHARK V has been offering the finest of saltwater fishing adventures for 30 years. FMI: (207) 633-3416