Solitude & Shallows – Chandeleur Island
Louisiana’s famed barrier Islands are the place for sight-fishing adventure.
By Robert Sloan
About 90 minutes south of New Orleans the road comes to an end in Venice, Louisiana, a fishy-looking place that leads the way to the southern end of the Chandeleurs, a 40-mile stretch of barrier islands offering nothing more than endless white sand beaches, gin-clear bays and surf. You’ll find solitude that many did not know exists, a bezillion birds and all the trout and reds you could hope for. 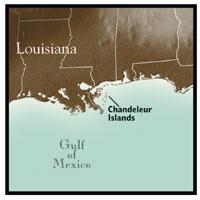 For the shallow-water angler the Chandeleur Islands are it, period. These deserted islands belong to the birds, literally. It’s one big federally protected bird sanctuary that just happens to be surrounded by endless flats teaming with gamefish.