LAST CHANCE, Idaho — Down, but not out. That’s the general consensus for Idaho’s classic trout stream, the Henrys (North) Fork of the Snake River.

Consecutive years of drought have taken their toll on a number of Intermountain Region fisheries, and the Henrys Fork is no exception.

“We’ve had six years of drought conditions, and there has been a steady decline in the fishery, and last year we had unseasonably warm weather early in the summer which hurt the fishery,” said Phillip Chavez at Hyde Outfitters & Last Chance Lodge (208-558-7068).

“But a bad day on the Henrys Fork is better than an average or a good day on most other rivers.”

His latter sentiment was expressed by John Taylor at Ace Hardware and Outdoor Sports (208-232-8722) in Pocatello.

Despite the negative effects of the drought on the Henrys Fork, it remains a strong fishery.

There are several reasons to expect an overall better year on the Henrys Fork, and some sections of it are fishing as well or better than they were in the pre-drought years. 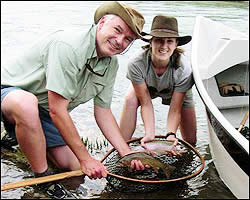 “Regardless of the drought conditions, this is the most popular river in the
area during June,” Chavez said, “because we always have good flows and we’re fishable when other rivers may be off-color from runoff.”

“And overall I think we’re going to see a pretty good year on the Henrys Fork and a better year than we’ve seen the last couple of years.”

For starters, because of repair work done on the Island Park Dam this winter, about two to three times as much water as normal was released downstream.

“The extra water is going to prove to be more important than any other factor because it provided extra habitat and minimized winter fish mortality,” Chavez said.

“It also means young-of-the-year trout that live in the marginal habitat had more water to survive in, and the extra flow provide more water for the fish to spawn in.”

“We’re going to have a lot better spawn than we have had the last couple of years.”

And the fish should be strong and healthy in the early season.

By early June, the giant stonefly hatch will likely have moved through the lower stretch of the river but could still be taking place in Box Canyon (from just above Last Chance up to Island Park Dam) and above Island Park Reservoir in the Coffee Pot Rapids area.

Large stonefly nymphs or general attractors like Yuk Bugs and Rubberlegs are effective patterns, along with a variety of other nymphs.

Stonefly and buggy attractor nymphs like the Yuk Bug remain effective after the hatch.

Chavez recommends a stonefly nymph trailed by your favorite beadhead dropper, from a small Pheasant Tail to a Caddis Pupa.

Throwing big dry stones is a lot of fun when the trout are keying on the flies on top.

Around June 10, if a little wet and cool weather moves in, decent Green Drake hatches should show from Riverside Campground upstream.

Call ahead to check on hatch progressions.

And remember, the Harriman Ranch State Park section of the Henrys Fork just below Last Chance doesn’t open until June 15.

Other hatches that appear regularly early summer include Pale Morning Duns and a variety of caddis hatches.

Except in the Harriman Ranch section, spin fishing is allowed on the Henrys Fork, though there are a variety of special regulations for different sections of the river.

What: Henrys Fork is always among the top fly fisheries in Idaho.

This year is no different.

Where: There is great action throughout the river.

Box Canyon, Cardiac Canyon and much more should provide access and opportunity.

When: The best bites kick off in late May.

Big stones carry through early June and from there things only get better.

How: Carry your fly rod and a good assortment of flies in you box.

The Box Canyon and, once it opens, the Harriman Ranch sections of the Henrys Fork attract the most pressure, but there are miles and miles of river to fish.

If you want to get away from people you still can.

A developing option on the Henrys Fork is to fish for cutthroat in the Macks Inn area, notes Chavez.

In recent years the Idaho Department of Fish and Game has stocked thousands of cutthroat fingerlings in this section.

“There has been a pretty significant stocking of cutthroat in the Henrys Fork in the Macks Inn area,” Chavez said.

“They should go into the reservoir where they can get big, and then come up in the Macks Inn area to spawn. I’m anticipating better fish numbers in that stretch than we have had in along time.”

Hurzeler said his favorite section of the Henrys Fork was a float through the Cardiac Canyon stretch, a section located downstream from lower Mesa Falls to Warm River (contact Hurzeler for details on put-in and take-out spots).

There’s excellent road access to this section heading upstream from the north side of the river at Ashton, or heading downstream from the mouth of the Warm River.

I like the unfloatable section between of river between the Hatchery Ford access and Upper Mesa Falls.

There’s limited access here, and, if you’re willing to walk a ways, you can get away from people.

However, the last two years this section has fished poorly for me.

If you stop by either the Lower or Upper Mesa Falls, you often see some nut who has hiked down marginal trails to the rough sections below these amazing waterfalls.

I’ve tried below each during the stonefly hatch and enjoyed only marginal results, but just spending a couple of hours below the giant falls has its own rewards.

As a final note, don’t overlook the lowest end of the river in the agricultural country from Ashton Dam downstream to the South Fork confluence.

This section of the river has been least affected by drought and has fished very well, particularly early in the season.

With the upper river not up to par, the lower section has attracted more attention from locals and guides.

Lower river access points include at St. Anthony and the Chester and Seeley access areas marked by sportsman access signs off U.S. 20 between Ashton and St. Anthony.

Please be respectful of private lands in this stretch.

While rainbow are the predominant species in the upper river, the lower section also features some large brown trout that can be taken on nymphs or dry flies.

On the lower and upper river, pack along some streamers and a variety of Woolly Bugger and sculpin patterns.

Standard black, brown and olive Buggers, fished on sinking lines or heavily weighted, are always a good bet when other offerings fail.

And, as always, check your regulations because this river has plenty of them!