Run koke imitators for Upper Twin browns
By Chris Shaffer
BRIDGEPORT, Calif. — The Eastern Sierra is known as one of the best places in California to catch limits of rainbow trout.

Every drive-to lake and most streams are planted practically weekly with ½-pound rainbows, which are heavily targeted in spring and summer.

In the fall, though, the Eastern Sierra paints a different picture.

Gone are the days where families soak dough bait in the lakes, cast spinners in streams and drench nightcrawlers in ponds.

In are the times where hardcore brown trout anglers endure long drives from all over California for a chance at hooking a huge fish. 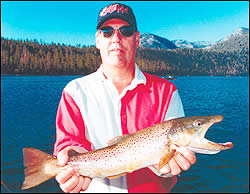 Historically, Upper Twin has yielded some of the largest browns in California — in fact, in 1987 the state record was caught here.

That fish weighed nearly 27 pounds and beat the previous state record, which was also caught here.

“It’s excellent, just by virtue of the fame that it holds the current state record. I think it’s because of the kokanee salmon that are in the lake,” said Jim Reid of Ken’s Sporting Goods (760-932-7707) in Bridgeport.

“Those kokanee school up all summer and they’ll run 8 to 12 inches. They don’t get that big. Most of the time you can graph the lake with a fishfinder and see big schools of kokanee.”

“Underneath them you’ll see three or four great big blips. You have to assume those are browns. They cruise up and hammer those kokanee. It’s a free lunch and the browns get big by filling up on the kokanee.”

Upper Twin has much more than kokanee for the browns to feed on. Chubs, Lahontan redsides, crawfish and planted trout allow the browns to grow large fast.

The mystery at Upper Twin is; are there still big browns here? The lake hasn’t produced the number of big browns it once did.

“In my opinion, back in the ’70s and ’80s the brown baggers used to come up here a lot and spent a lot of time on those lakes.

A lot of the folks that come up here now aren’t really focusing on browns over 10 pounds,” Reid said.

“I think it’s because it’s hard. In the old days they used to claim you had to put in hundreds of hours to get one big fish over 10 pounds. It’s not easy.”

Reid adds that hunting for big browns isn’t as glamorous as it used to be, and that many of the old brown baggers now chase bass.

Perhaps that’s because the best brownie bite can come in rough conditions.

“You have to fish when it’s nasty and you don’t want to be out there. It has to be cold, windy and snowy and not many people are into that.”

Upper Twin isn’t exclusively the home of big browns. You can also catch big rainbows and smaller 3 to 6-pound browns.

“I would say if you work it hard, not just playing around, your odds are good that you’ll catch some kind of brown,” Reid said.

Upper Twin is a deep lake with steep drop-offs. Most action comes via trolling, but you can tap into good fishing from shore as well.

It isn’t imperative that you are in 160 feet of water to catch browns.

It does happen, but that would be an exception of the rules,” Reid said.

So instead of worms, cast big lures like silver Kastmasters or Krocodiles or large stickbaits.

While browns can be found anywhere along the shoreline in fall, Upper Twin’s inlet and outlet tend to yield the largest fish.

“Normally when they are in deeper water, they aren’t in feeding mode because all the bait they want to eat will be in shallow water.”

Locating big browns can be a chore on bright sunny days, as browns don’t feel as comfortable cruising the shorelines when water is calm and flat.

On the other hand, when there are clouds overhead or a chop on the water, browns will cruise the shoreline in search of food all day.

If you are going to troll, stay roughly 30 to 50 feet offshore. Sometimes, the big browns will be right on the surface; other times, they can be down 15 to 35 feet.

When trolling, you want your bait to imitate any of a number of food sources. Be careful about what part of the kokanee’s life cycle you imitate, though.

Kokanee spawn in September in Upper Twin and that’s when they have red on them. In the fall, they are silver.

What: Fishing for trophy browns in the Eastern Sierras.

When: Season runs through Nov. 15 this year.

Kokanee aren’t the only baitfish patterns browns will attack. In fact, catch results can be equally good with stocker rainbow trout imitations.

Troll big plugs and swimbaits that can swim at 2 to 4 mph and won’t roll over on their side, which most baits with a bill do.

A.C. Plugs are probably the most popular, but Optimum makes a few big trout imitations that work well, too.

Another notable lure is the 8-inch Megabait Charlie; because this lure has a bill, it can be effectively trolled at normal trolling speeds.
Many anglers at Upper Twin don’t troll in a straight line. Sharpies spend a lot of time strike trolling and others zigzag the lake and do figure-8s.

Keep in mind that Upper Twin and all other waters in Mono County are open to fishing through Nov. 15 this year.

This is an extension from the old Oct. 31 closure.

Unfortunately, the resort on Upper Twin is set to close on Nov. 1, which keeps anglers with most boats out of luck, as the launch ramp is located inside the resort’s boundary.

You can still fish out of cartoppers.

It’s legal to park on the side of the road and drag the boats over the rocks and into the lake.

Some anglers fish out of canoes, but if the winds pick up like they traditionally do, you’ll want to get off the water in a hurry.